I was about twelve years old when my father who was then serving in Indian Army was transferred to Assam, one of the eastern states in India. My family shifted from Lucknow base in UP to Assam. We travelled mostly by trains those days and it took us nearly two and a half days to reach Guwahati and then from there another couple of hours to reach our Army accomodation.

Train journeys had their own charm. As kids, we would see clouds, trees and fields drifting away as the train sped up. The view of flooded fields, bright green paddy being sown by farmers who had their calves soaked in mud was quite intriguing. Witnessing the enormous Brahmaputra river from the train traversing swiftly on the bridge was frightening and super exciting. I remember people making wishes and tossing coins in the river. Brahmaputra woke everyone with its formidability. I vividly remember the tiny fisherman boats floating with the current of the mighty river. These are just a few things that I remember from my train journey to Guwahati.

Army unit was about six hours from Guwahati and bus used to be our best option. I particularly remember the red soil of Assam which was strikingly different. Mind you, I was a kid, so even the simplest and common things for adults were awe-inspiring for me.

In the next few weeks, we were pretty settled there. It was beautiful always. There was pitter-patter of rain every other hour. This place was superabundantly green. Sun rose way before five in the morning and days always seemed short as the sun used to set around five in the evening.

With so much of nature, came the snails which were harmless, however had covered the entire backwall of our house and were also hidden in the grass, in gravel and on pavements. I hated them and inadvertently crushed a lot of tiny ones and I could never see them amidst grass, I only heard them getting crushed which scared me and I would run and hear more crushings at a faster pace. While snails were harmless, snakes were not. I saw snakes every two days, they horrified me. By God’s grace, I never had to fight one or got bitten by one. I wouldn’t have ever won with a snake.

There are so many fond memories of Assam. On my way to school I used to just gaze out of my bus and witness the waterlogged fields blossoming with lotuses. This went on for miles and miles as my school was pretty far from my home.

Even today, when I close my eyes and I can still see the lotuses in the murkiest of muck, looking as fresh as the dew that sat on them every single morning. 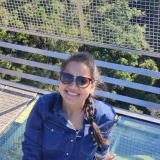 A believe of the power of expression. From time to time, I would pen down my thoughts on this page on the ever evolving world around me. I would cover things, people and emotions that catch my eye. Sometime with words, sometimes with pictures.

Let's stay connected here and get to know one another's world! It's The Pink Lens Stories, from my perspective.

I would be excited for your feedbacks on my blog!!

5 replies on “Pitter – patter of memories”

I really like your blog. A pleasure to come stroll on your pages. A great discovery and a very interesting blog. I will come back to visit you. Do not hesitate to visit my universe. See you soon 🙂

such a sweet post. NE of India is very much in my wish list. Let us see what plans God has for me!

Thanks. It’s absolutely stunning. All the best!